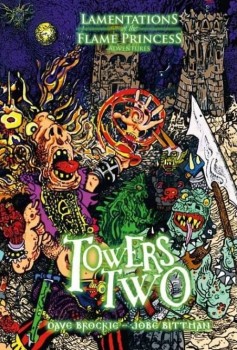 Accessorio per Lamentations of the Flame Princess in inglese
The Ultimate in Sleaze & Sorcery!

Dave Brockie (GWAR, Whargoul) and Jobe Bittman (The Monster Alphabet, The One Who Watches from Below) bring you a sordid adventure in a countryside ravaged by unending war!

Featuring the Eloi! The Suck-Thing! The Loi-Goi! Spooks! Osuka the Talkative! The Sea Slut! Pig-Men! Truly unmentionable magic! The two brothers in their Towers Two!

Lavishly illustrated by Jeremy Duncan and Dave Brockie himself, this tome also contains an appendix with the last unabridged, unedited draft submitted by Brockie before his death.

Towers Two is an adventure for use with Lamentations of the Flame Princess Weird Fantasy Role-Playing and other traditional role-playing games.