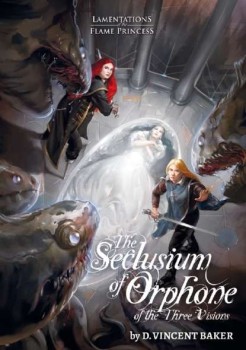 
A place to which a wizard withdraws from the world to pursue mastery.
A place of magic and plasms and grotesques and horrors and treasures and doorways to other worlds.
A place which, when abandoned by the wizard but with its treasures and dangers remaining more or less intact, is a terrible and antic catastrophe in process.
A place which makes for marvelous location-based adventures.

This book provides rules, guidelines, tables, and suggestions for creating wizards seclusia for your own campaigns, and features three sample seclusia in various stages of completion, including the Seclusium of Orphone of the Three Visions.

Suitable for characters of all levels, usable with Lamentations of the Flame Princess Weird Fantasy Role-Playing and other traditional role-playing games.