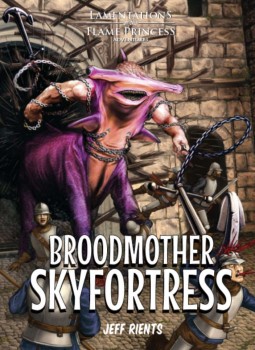 Since the invention of the adventure module, there have only been five adventures that were rated the most awesome, the most epic. Broodmother Sky Fortress leaves them all behind. Its got these creatures that are half shark. Half elephant. All badass. They fly around in this cloud fortress, wrecking everything in the campaign until the players step up to stop them. Its all terribly exciting! And all brought to you by none other than the world-famous Arch-Mage of Old-School, Jeff Rients!

As an added bonus, weve included a Greatest Hits of the ol Arch-Mages essays and game tools to build your campaign into the unstoppable juggernaut youve always wanted it to be. Your game wont suck anymore!

Broodmother SkyFortress: Buying any other adventure is just throwing your money away?