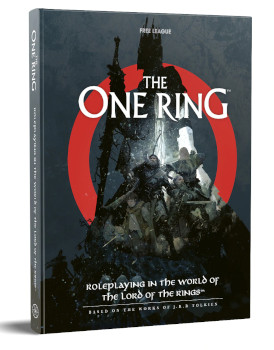 Manuale di gioco di ruolo base in inglese
Enter the world of Middle-earth with The One Ring, the official tabletop roleplaying game based on the works of J.R.R. Tolkien. Designed specifically to evoke the atmosphere of The Hobbit and The Lord of the Rings, the game contains rules for creating heroes and sending them off on adventures in a land threatened by the growing Shadow.

This beautifully illustrated, full-colour hardcover manual presents Middle-earth as it was twenty years after Bilbo Baggins remarkable disappearance and unexpected return. The great events narrated in The Lord of the Rings are still fifty years away, leaving plenty of room to narrate stories worthy of an epic.

Now in its second edition, The One Ring comes with updated and revised rules, a new visual style, and a focus on the land of Eriador  the lone-lands west of the Misty Mountains. Among its key features are:

Rules for travelling across the land (Journey), facing frightening foes (Combat), and meeting the personalities of Middle-earth (Council).

Thorough advice for the Loremaster on how to bring Middle-earth to life, including rules for magical treasure, the Shadow, and the Eye of Mordor.

In-depth information on six Patrons  individuals sponsoring the adventures of the Player-heroes  including Bilbo Baggins and Gandalf the Grey.

A bestiary containing a spread of adversaries, from lowly Orc Soldiers and Highway-robbers, to monstrous Cave-Trolls and Barrow-Wights.

Rules to create your very own Nameless Things  unknowable beings from the dark corners of the world.

A complete Landmark adventure, The Star of the Mist, with extra support for new Loremasters, in the form of tutorial advice throughout.

A full PDF of the rules is included, and will be sent to you shortly after purchase.

The One Ring, Middle-earth, and The Lord of the Rings and the characters, items, events, and places therein are trademarks or registered trademarks of the Saul Zaentz Company d/b/a Middle-earth Enterprises (SZC) and are used under license by Sophisticated Games Ltd. and their respective licensees. All rights reserved.

Daemon of the Forest - Italiano

Legend of the 5 Rings