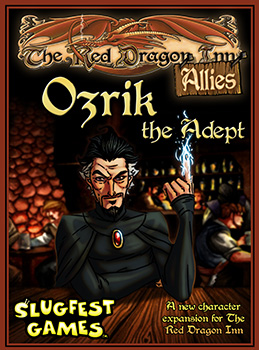 Accessorio in inglese per Red Dragon Inn
After years spent in the pursuit of elemental power during which Ozrik caused a great deal of damage, he realized he had literally burned bridges behind him. Now he travels the world as an adventurer. Hes still causing damage only now hes doing it for the right reasons!

The Good: Ozriks phenomenal control of the elements is useful versus undead, monstrous humanoids, and other evil dungeon dwellers.

The Bad: Side effects for Ozriks companions may include spontaneous combustion, static discharge, and clammy hands.

The Red Dragon Inn: Allies  Ozrik the Adept expands the party at the Red Dragon Inn with a brand new elementalist who is a master of manipulating his abilities. Many of Ozriks cards have more powerful effects if you discard other cards from your hand. Carefully managing your hand to build these powerful combos will be the key to victory in any tavern brawl!

The King is Dead - Seconda Edizione